Using Survival Gear For Backup When an Appliance Fails 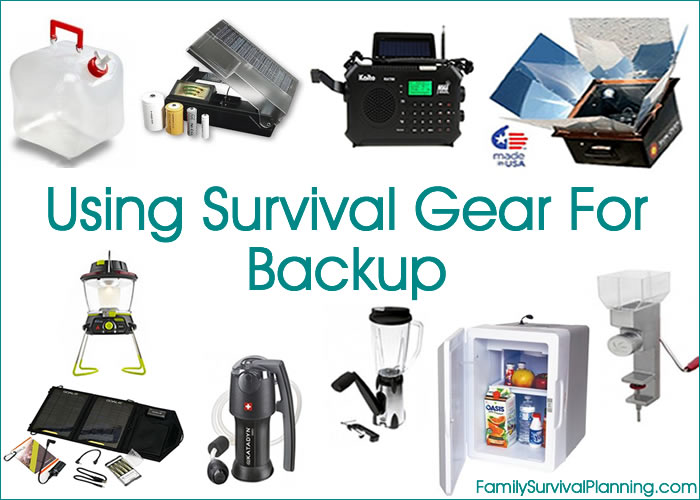 Can you think of a more important appliance than a refrigerator/freezer in these modern times? I can't.

Appliances were once designed and built to last a generation or longer. Refrigerators, washers and dryers lasted for decades. Now the average appliance fails within a few years, and the electronic board–costing roughly a third of the entire appliance price–fails and must be replaced. With labor, the cost of the repair is so high, consumers often send the almost-new appliance to the landfill and buy a new (and soon to fail) appliance.

Even though the cost of the repair was by no means cheap, we calculated that we bought another 12-15 years on our old, reliable refrigerator, saving us thousands in the purchase of a new one (maybe more than once in the next 12-15 years).

How to Save Your Food

So what do we do with all the frozen foods, as well as the milk, cream, cheese, eggs, mayonnaise, leftover chicken and more?

Well, luckily, we have another freezer in the basement so we transferred all frozen foods to that freezer.

The repairman said it would take at least 24 hours to acquire the parts needed to fix it. So what could we do to save the foods that needed refrigeration right now?

Here's what we did - let me explain.

Two years ago we determined to become as prepared as we could possibly afford in the event of a complete and long term power outage. So we purchased a solar generator, including two extra batteries and two extra solar panels.

After setting it up (read about our total house set up here) and with it fully charged, we tested every appliance in our home to see how many we could use and for how long if we had no electricity. We tested the refrigerator, the freezer, grain mill, microwave, light fixtures, fans (for cooling), Excalibur dehydrator, coffee maker, crock pot, Bosch mixer - well, everything we could possiby need in an extended blackout.

What we learned was that we could never sustain an electricity-hungry refrigerator for more than an hour or two. Our small freezer in the basement could be sustained longer than the refrigerator.

So we set out to find something that could be used to keep foods cool enough not to spoil. Keeping them frozen was out of the question (which is why it's good to store canned and freeze-dried foods).

Scouring Amazon, we found an appliance called a Koolatron. (I know, it sounds like something similar to a megatron or something scientific.)

It's really a very simple cooler/heater! Here's how it works: 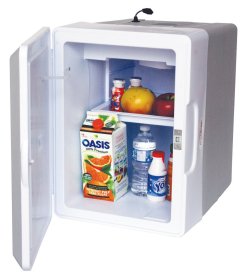 It can be used in the car, at a campsite, or at a tailgate, and is designed to hold an incredible amount of food and drink. Ours is a 52 quart size (that's a lot of soda pop cans!).

It plugs into your car's 12 volt outlet and can be used either vertically or horizontally. We have a converter so in this case, still having electricity, we were able to use the converter and plug the cooler into a regular 120 volt electrical socket. It also uses the 12 volt receptor in the solar generator.

So having the Koolatron in our survival gear, we were able to save our food from spoilage and it definitely passed the emergency refrigeration test. Believe me, we are very glad to have this great appliance in our survival gear ready to use when we need it.