Is It Possible to
Survive a Nuclear Attack? 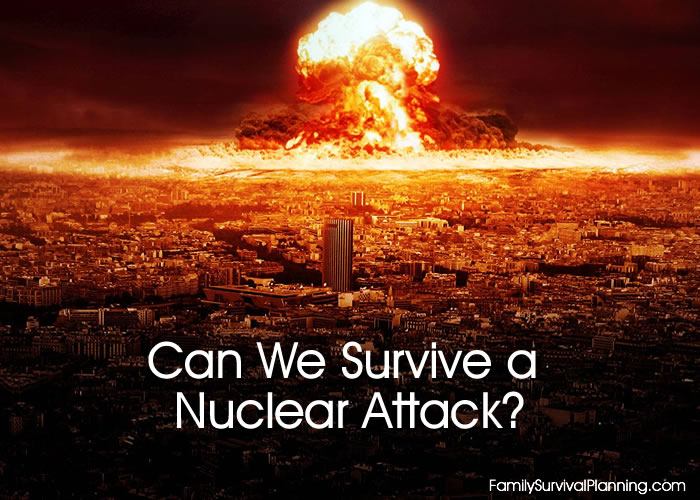 Too many countries currently have nuclear capabilities. Will North Korea's Kim Jong Un carry out his threat to nuke the United States? Will we go to war with Iran? We don't exactly what nuclear capabilities other countries have, but the need to know how to survive has never been so urgent, in my opinion.

Do you know what to do in the event of a nuclear attack?

Not one city in America has a plan in place if a nuclear bomb is detonated - not one. Emergency planners, like the rest of us, are overwhelmed psychologically at the thought of a nuclear catastrophe. Hearing "nuclear attack", people are paralyzed and feel like it's futile because "we'll all be dead."

Professor Iwrin Redlener in his TED Talk stated, "We can change the survival rates by doing some commonsensical things."

So the goal here is to minimize fatalities.

Don’t rely solely on cell phones during a natural disaster. Keep a well-stocked emergency kit in a safe place, stocked with emergency radios, lighting, and communication devices ready to go when you are.

If any country is the recipient of nuclear attack, obviously the people closest to the explosion would, in all likelihood, be killed by the blast, or by the heat or initial radiation of the fireball. There would be heavy damage to all surroundings.

If people are a few miles away (light damage areas), they would be endangered by the blast and heat, and by fires that the explosion might start. However, it is likely that most people in the light damage area would survive, but they would be in danger of being exposed to radioactive fallout.

What supplies will you need in case of a nuclear attack?

People who are outside of the damage areas would not be affected by the blast, heat, or fire. If a nuclear attack was launched against America, many millions of people would most likely be outside of the ground zero, heavily damaged areas. These people, as well as those in the light damage areas who survived the blast, heat, and fire, the main danger would be radioactive fallout. This, of course, would depend on which way the wind is blowing. (Department of Defense studies)

What Type of Protection Will We Need

While it is impossible to know if you live in an area that might be targeted by a nuclear attack, your chances might be greater if you live in large, coastal cities or cities that harbor our financial centers. You may have only one option in order to survive — relocate to an obscure small town in the middle of the country. Of course, that is not a viable option for most people. You might check with your city government and ask if there are any fallout shelters and where they are located.

Although you may live away from ground zero and would likely survive the blast. heat, and fire effects, you would still need protection from radioactive fallout. Millions of people could be saved by creating safe rooms for fallout protection. (See Creating a Safe Room for instructions on how to do it yourself.)

When a nuclear weapon explodes near the ground, it pulverizes the earth. Huge quantities of pulverized earth and other debris are sucked up into the nuclear cloud. There the radioactive gases produced by the explosion that condense on and into this debris, producing radioactive fallout particles. In a very short time, these particles fall back to earth — the larger ones first, the smaller ones later. As this debris is falling, and after it reaches the ground, the radioactive particles give off invisible gamma rays — like X-rays — too much of which can kill or injure people. These particles give off most of their radiation quickly; therefore the first few hours or days after an attack would be the most dangerous period.

The particles from fallout look like grains of salt or sand, but the rays they give off cannot be seen, tasted, smelled, or felt. Special instruments are required to detect the rays and measure their intensity.

After a nuclear attack, the fallout particles are carried by wind currents, and are effected by weather conditions, and other factors. There is no way of predicting in advance what areas of the country would be affected by fallout, or how soon the particles would fall back to earth at a particular location.

Some communities might get a heavy accumulation of fallout, while others — even in the same general area — might get little or none. No area in the U.S. could be sure of not getting fallout, and it is probable that some fallout particles would be deposited on most of the country.

Areas close to a nuclear explosion might receive fallout within 15 - 30 minutes. It might take 5 - 10 hours or more for the particles to drift down on a community 100 or 200 miles away.

Generally, the first 24 hours after fallout settles would be the most dangerous period. The heavier particles falling during that time would still be highly radioactive and give off strong rays. The lighter particles falling later would have lost much of their radiation high in the atmosphere. 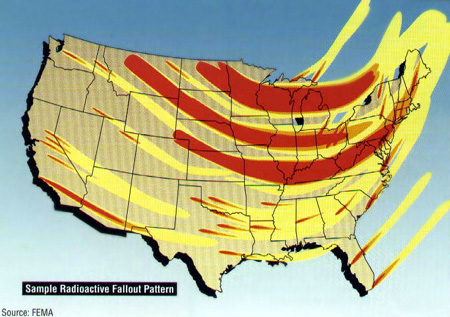 The invisible gamma rays given off by fallout particles can cause radiation sickness. Radiation causes a chemical change in the cells in our bodies. If a person receives a large dose of radiation, he will die. But if he receives only a small or medium dose, his body will repair itself and he will get well. The same dose received over a short period of time is more damaging than if it is received over a longer period. Usually, the effects of a given dose of radiation are more severe in very young and very old persons, and those not in good health.

Following are estimated short-term effects on humans of external exposure to gamma radiation from fallout during a period of less than 1 week. The total exposure is given in terms of Roentgens (R), a unit for measuring the amount of radiation exposure.

200 - 450 R — Most will require medical attention because of serious radiation sickness. 50% deaths within two to four weeks.

450 - 600 R — Serious radiation sickness; all require medical attention. Death for more than 50% within one to three weeks.

What About Potassium Iodide ?

What Does Potassium Iodide do?

When Potassium Iodide is taken as directed, it literally "floods" the thyroid with a stabilized iodine, basically saturating the thyroid gland so that the radioactive Iodine 131 particles cannot find a home and is expelled out the normal body waste channels. Potassium Iodide tablets can prevent up to 99% of the damage caused by radioactive nuclear fallout (dust).

What Potassium Iodide doesn't do.

Should we stock up on Potassium Iodide?

Answering the above questions is the first step in determining your personal comfort level and how prepared you want to be.

"… if you haven't stored some potassium iodide, there will probably be NONE available to you in a time of crisis… a 100-day supply is recommended."
—Doctors for Disaster Preparedness

Even if your community received large amounts of fallout particles, you soon might be able to leave the shelter for a few minutes or a few hours at a time. It is unlikely that you would have to live in a shelter for more than a week or two.

Specially trained people (usually a task force within your city, county or state) will have access to special instruments to detect and measure the intensity of fallout radiation and will advise people when it is safe to leave the shelter.

There are Many Kinds of Fallout Shelters

The farther away you are from the nuclear attack and fallout particles outside, the less radiation you will receive. Also, the building materials (concrete, brick, lumber, etc.) that are between you and the fallout particles serve to absorb many of the gamma rays and keep them from reaching you.

So a fallout shelter doesn't need to be a special type of building or an underground bunker. It can be any space, provided the walls and roof are thick enough to absorb many of the rays given off by the fallout particles outside, keeping dangerous amounts of radiation from reaching the people inside the structure.

A shelter can be the basement or an inside hallway in a large building if you're at the office. It can be the basement in your home, a subway or tunnel, or even a backyard trench with some kind of shielding material (heavy lumber, earth, bricks, etc.) used as a roof. (See Creating a Safe Room for instructions on how to do it yourself.)

In addition to protecting people from fallout radiation, most fallout shelters should provide at least some protection against the blast and heat effects of nuclear explosions if they were not too close by.

Would Food and Water be Useable and Safe?

In studies conducted by the Federal government, it has been determined that most of our food supplies would be usable after a nuclear attack. There would, of course, be some food shortages in some areas as commerce would understandably be interrupted for a time.

Since radiation passing through food does not contaminate it, the only danger would be the actually swallowing the fallout particles that happened to be on the food itself. Fallout might be on the can or package containing the food, but these could be wiped or washed off.

Water systems might be affected somewhat by radioactive fallout, but the risk would be small, especially if a few simple precautions are taken. Water stored in covered containers and water in covered wells would not be contaminated after an attack, because the fallout particles could not get into the water. Even if the containers were not covered (such as buckets or bathtubs filled with emergency supplies of water), as long as they were indoors it is highly unlikely that fallout particles would get into them.

Practically all of the particles that dropped into open reservoirs, lakes, and streams (or into open containers or wells) would settle to the bottom. Any that didn't would be removed when the water was filtered before being pumped to containers. A small amount of radioactive material might remain, but at the most it would be of concern for only a few weeks.

Milk contamination from fallout is not expected to be a serious problem after an attack. If cows graze on contaminated pasture and swallow fallout particles that contain some radioactive elements, their milk might be harmful to the thyroid glands of infants and small children. Therefore, if possible, they should be given canned or powdered milk for a few weeks if authorities say that the regular milk supply is contaminated by radioactive elements.

In summary, the danger of people receiving harmful doses of fallout radiation through food, water, or milk is very small. People suffering from extreme hunger or thirst should not be denied these necessities after a nuclear attack, even if the only available supplies might contain fallout particles.