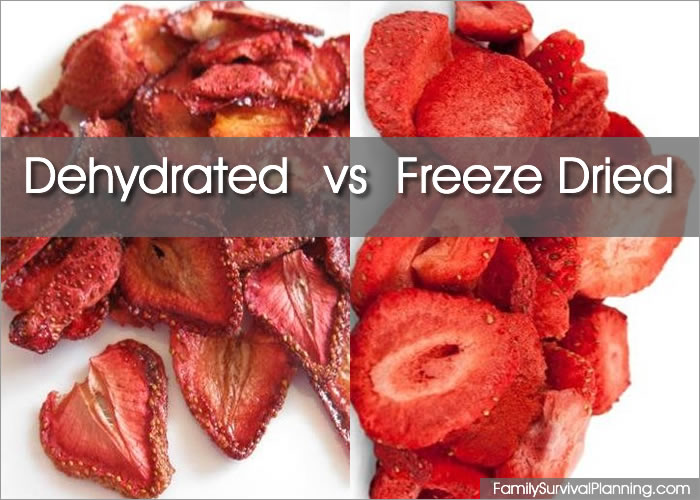 Dehydrated foods have been prepared for centuries — freeze dried for only a few decades. Before the age of refrigeration, dehydrating was a common practice.

People "back then" didn't do this to store food for years down the road. They used this method, along with canning, smoking, curing, and pickling, to store the produce they grew all summer and the meat they raised so they could survive until the next harvest and through the winter . Today, both methods are popular, as well as prudent, but most of us do it for the future (and it's good for everyday meals too). We all read the news and see what's going on in the world. We're skeptical about prices and availability of food in the future — so we prepare as best we can.

There is a plethora of information available about preserving food, and plenty of so-called "facts" about their nutritional value, the costs, the serving sizes, and other debated subjects. So we're going to explore the pros and cons of both freeze dried and dehydrated foods.

Let's start with a comparison and see what the real facts are: 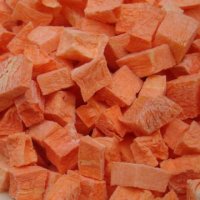 The Freeze Drying Process: Fresh or cooked foods are placed in the dryer where they are frozen to -40 degrees Fahrenheit or colder. Once the food is frozen, the freeze dryer creates a powerful vacuum around the food. Then, as the food is slightly warmed, the ice transitions into vapor and evaporates.

Shelf Life: FD foods are shelf-stable for 25+ years. The color, taste and texture remains the same (after rehydrating) similar to frozen foods.

Nutrition and Additives: Freeze-dried foods, like frozen, retain virtually all their nutritional content. As for additives, fruits and vegetables usually contain none.. Full dinners, on the other hand, may have many types of ingredients, including additives, that make up the content, flavorings, and spices that create the taste we enjoy. If additives are important to you, be sure to purchase freeze dried foods from a company that publishes the ingredient and nutritional labels on their website. (See Resources at the bottom of this article for stores who publish labels.)

Rehydrating and Uses: The most important positive about freeze dried foods is the convenience of using them in every day recipes as well as long term use. In a crisis situation where time is short and fuels for cooking are almost or entirely non-existent, these foods can be prepared quickly with either hot or cold water. 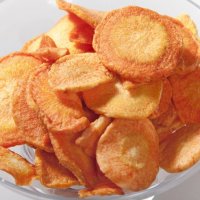 The Dehydrating Process: The food is heated with warm air for a period of time which evaporates the moisture in the food. Dehydrating at home in your own dehydrator is usually gentler than commercial dehydration because you control the the temperature and the time.

Additives: Usually there are no additives. Exceptions: Sodium bisulfite is used to retain the color of light/white foods such as potatoes, bananas, and apples. The same qualifier applies as freeze dried foods — any full meals have the same additives as any other method of preservation.

Nutrition: Because there seems to be so much controversy over the nutritional value of dehydrated vs freeze dried, I did some research. What the research revealed is that both FD and dehydrated have about the same nutritional value. Truth is canned foods loose more nutrition because of the extreme high heat necessary to process them - both water bath or pressure canning. But we eat them, don't we? Maybe this is really a non-issue just trying to be an issue. The real issue is: Will the food give us enough nutrition to keep us alive in a crisis situation?

Some interesting nutritional facts about dehydration:


Not sure you'll like freeze-dried foods? Try a FREE Sample from Valley Food Storage.


Rehydrating: My biggest objection to dehydrated foods is the time it takes to prepare them, which can take from 20-30 minutes usually in boiling water. This isn't an issue unless, in a crisis situation, time is short and fuel for cooking is scarce or non-existent. Yes, some foods can be rehydrated with cold water, but how long would it have to sit in cold water to make it edible? I haven't tested that. So for long term use that may include a catastrophe, I prefer freeze dried. (Comparing rehydrating jerky or raisins, as some websites do, is a false comparison of freeze dried and dehydrated foods. No one rehydrates jerky or raisins.)

There is little difference in the uses of both dehydrated and freeze dried foods. Both can be used in everyday cooking. You probably use dehydrated foods with every meal you prepare with foods such as pasta, rice, packaged sauces, spices, cereals, sugar, dry milk, mashed potato flakes, dried onions, onion soup packages — probably many more when you think about it.

Most  stores that sell long term foods that I'm familiar with and use frequently have very few dehydrated "dinners" — most only freeze-dry full meals. The majority of the dehydrated products are individual cans of potatoes, carrots, rice, pasta, as well as pantry items like baking powder, baking soda, cinnamon, sauces and gravies.

(More information about dehydrated foods is here. And learn how to dehydrate your own food here.)